Freedom of Information campaigner Heather Brooke has won Reform’s “Reformer of the Year” award; Left Foot Forward was one of the 1st to back her for the prize. 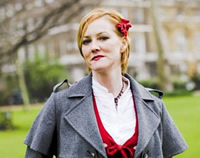 The Reform think tank have announced that Freedom of Information campaigner, Heather Brooke, has won their Reformer of the Year award.

On October 15th, Left Foot Forward mounted a campaign urging readers to vote for the woman, who played a leading role in the MPs’ expenses saga. Left Foot Forward understands that she won over a thousand of the 1,157 votes.

It is the case that Guido Fawkes – admitedly a blogger with many more readers that this youthful website – also backed Ms Brooke for the award and has some claim to her victory.

But we’re claiming the credit for backing her a FULL 18 MINUTES before Guido chose to!

Ms Brooke, we salute you.

6 Responses to “It was Left Foot Forward wot won it!”