David Cameron's approach to reducing inequality has come under attack from respected academics. Wilkinson and Pickett suggest he must address incomes at the top 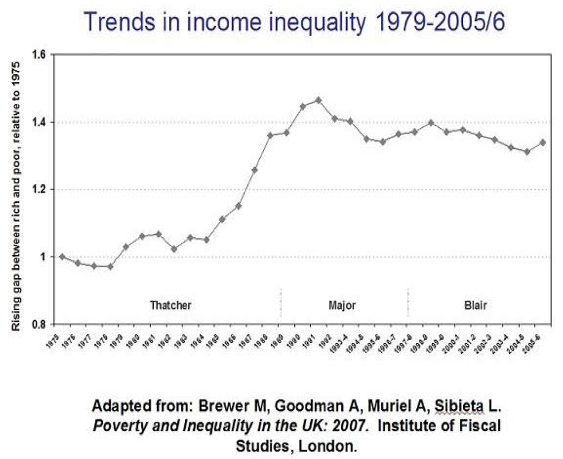 David Cameron’s approach to reducing inequality has come under attack from respected academics, cited by Mr Cameron, in the week that his use of poverty statistics were questioned for their accuracy.

On Wednesday, Channel 4 News gave Cameron 4/5 for inaccuracy for his use of poverty statistics (via Next Left) while this blog highlighted how the Institute for Fiscal Studies regarded ‘severe’ poverty statistics quoted by Cameron as “unhelpful.”

At a debate last night at the LSE, Richard Wilkinson and Kate Pickett rejected Cameron’s call for a focus on raising low incomes, rather than tackling inequality across society, to improve social cohesion and outcomes. As highlighted by Polly Toynbee, Cameron used his speech to justify tax giveaways to the rich like raising the inheritance tax threshold:

“That doesn’t mean we should be fixated only on a mechanistic objective like reducing the Gini co-efficient … we should focus on closing the gap between the bottom and the middle.”

“Bringing down the top incomes is very important. Cameron talks about social problems and diminishing responsibility as if they came from too much government. I think these are the long-term consequences of the rise of inequalities under Thatcher.

“In order to achieve the benefits of greater equality – and improve health and well-being for everyone in society – we cannot leave the top well alone. It is essential that we narrow the gap between the highest and lowest paid.”

Wilkinson and Pickett’s book ‘The Spirit Level‘ published earlier this year shows that countries with low inequality and good social capital also have big states. Frame 7 of a slideshow on their website show that ‘smaller state’ countries like the US and UK did worse than big states, for example in Scandinavia, where government action reduces inequality and fosters higher levels of social capital than in Anglo-Saxon states.

This is not to apologise for Labour’s lack of progress on inquality. Wilkinson and Pickett will be calling on all parties to address inequality as the main cause of social ills. Now is the time for Labour to make a commitment to a less unequal society rather than kowtowing to the city. But cross-dressing Cameron is now being exposed as the wannabe emperor with no clothes.